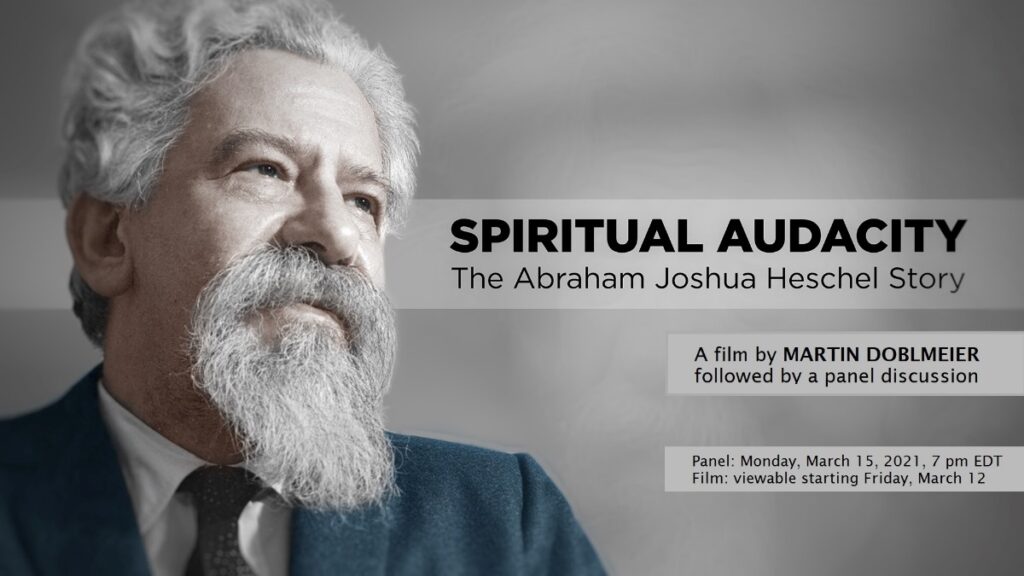 By special arrangement with producer Martin Doblmeier and Journey Films, the Institute for Jewish-Catholic Relations at Saint Joseph’s University is proud to invite you to view this new documentary and then to join with the producer and others in discussing it. Registering HERE will give you online access to watch the film beginning on Friday, March 12 and to participate in the webinar panel on Monday, March 15.

To view a trailer of the film, click here.

Abraham Joshua Heschel, a Polish-born rabbi who escaped to the United States from Nazi Germany and became one of the most influential public theologians and civil rights activists of the twentieth century, is the subject of the latest documentary by Martin Doblmeier and Journey Films: “SPIRITUAL AUDACITY: The Abraham Joshua Heschel Story.” The descendant of Hasidic rabbis and a “brand plucked from the fire” of the Holocaust, he was a friend and ally of Martin Luther King, Jr., helped begin a new friendship between Jews and Catholics, opposed the Viet Nam War, and brought the Hebrew prophets to life — not only by his words, but also by his deeds.

The film’s title, SPIRITUAL AUDACITY comes from Heschel’s response to President John F. Kennedy, who invited him to a White House conference on race and religion, intended to derail a planned march on Washington. Susannah Heschel recalls her father’s response, sent by telegram: “‘I propose that you, Mr. President, declare a state of moral emergency. The hour calls for moral grandeur and spiritual audacity.’”

The webinar panelists include:

Martin Doblmeier, the producer of SPIRITUAL AUDACITY, holds degrees in Religious Studies, Broadcast Journalism and three honorary degrees in Fine Arts and Humane Letters. Since 1984 he has produced and directed more than 30 films focused on religion, faith and spirituality. He combines a lifelong interest in religion with a passion for storytelling. His films explore how belief can lead individuals to extraordinary acts, how spirituality creates and sustains communities and how faith is lived in extraordinary ways.

Susannah Heschel, Ph.D., is the Eli Black Professor of Jewish Studies at Dartmouth College. Her scholarship focuses on Jewish-Christian relations in Germany during the 19th and 20th centuries, the history of biblical scholarship, and the history of antisemitism. Her numerous publications include Abraham Geiger and the Jewish Jesus, which won a National Jewish Book Award, and The Aryan Jesus: Christian Theologians and the Bible in Nazi Germany. She also edited a collection of her father’s essays, Moral Grandeur and Spiritual Audacity: Essays of Abraham Joshua Heschel.

Rabbi Abraham Skorka, Ph.D., is the rector emeritus of the Seminario Rabínico Latinoamericano Marshall T. Meyer in Buenos Aires and recently completed an appointment as University Professor at Saint Joseph’s University. He co-authored with his friend Pope Francis the best-selling book, On Heaven and Earth. His Jewish spirituality in the Masorti (Conservative) movement was heavily shaped by Heschel’s pupil, Rabbi Marshall T. Meyer and by Heschel’s influential essay, “No Religion is An Island.”

Philip A. Cunningham, Ph.D., co-directs the Institute for Jewish-Catholic Relations and is a professor of theology at SJU. Past president of the International Council of Christians and Jews, he is the author of Seeking Shalom: The Journey to Right Relationship between Catholics and Jews and of the forthcoming Maxims for Mutuality: Principles for Catholic Theology, Education, and Preaching about Jews and Judaism.

Moderator: Adam Gregerman, Ph.D., co-directs the Institute for Jewish-Catholic Relations and is associate professor of Jewish studies at SJU.  The author of Building on the Ruins of the Temple: Apologetics and Polemics in Early Christianity and Rabbinic Judaism, he is Vice-Chair of the Council of Centers on Jewish-Christian Relations, reviews editor of Studies in Christian-Jewish Relations. and a member of the Committee on Ethics, Religion, and the Holocaust at the U.S. Holocaust Memorial Museum.