Mediterranean Coastline: Exploring the Land, Crossroads of Our Faith 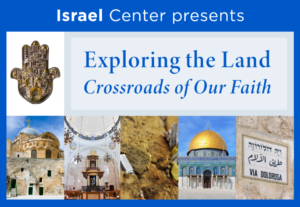 The Israel Center at the Jewish Federation is offering a four-part virtual tour, “Exploring the Land: Crossroads of Our Faith.” Guide Gadi Ben-Dov takes participants on a virtual tour through Israel from the perspective of three monotheistic faiths–Judaism, Christianity, and Islam. Join to see why this country is important to so many.

The second session of the series is scheduled for January 10th and explores the Mediterranean coastline. Caesarea, an “artificial” city and port built 2,000 years ago by Herod the Great, has well-preserved Roman ruins (theater, amphitheater, hippodrome, etc.). Within Christianity, the city is known as the site of the meeting between Peter and Cornelius, the Roman Centurian, as Peter became the first non-Jewish person to convert to Christianity. In Jewish tradition, the Great Jewish Revolt against the Roman Empire broke out here and the Romans executed the Rabbinic leadership of a second revolt in the city’s amphitheater. Continuing along the coastline, we will visit Haifa and Mt. Carmel, considered to be the area where Elijah the Prophet lived. Finally, we will head into Akko, which until today is a mixed city for Jewish, Christian, and Muslim residents. As one of the key port cities for the conquering Christian Crusaders nearly 1,000 years ago, this city remains a beautiful, walled ancient city filled with history, stories, and, most importantly, good hummus.

Each 75-minute session starts at 11:30am on the scheduled day. The cost for all four sessions is $18. To register for the series, visit JFedSTL.org/Crossroads.